When premises were being refurbished for a newcomer to the cluster of technology companies in Malvern, Worcestershire, local Daikin D1 Partner Wayne Young of Young Air Conditioning was called in to advise. He says: “The premises – two storeys, totalling about 100m2 – had electric storage heaters and some existing air conditioning split systems. The heaters fell short of modern energy efficiency standards and the air conditioning systems were nearing the end of their economic lives – there were both R407c and R410a systems that would eventually have to be replaced.”

Rather than facing a systems upgrade in the future, the new tenant selected the Daikin R32 alternative for heating and cooling. Daikin’s R32 systems are designed to smoothe the transition from high to low global warming potential (GWP) refrigerants during the phase-down of HFC gases such as R410a. R32 is a 50% component of R410a, but on its own has a substantially lower GWP rating – 675 against 2088.

Switching to R32 is a sensible alternative for any user needing to replace split systems.

“The company should not need to be disturbed for anything more than routine servicing of its air conditioning systems for at least a decade – and possibly more than 15 years. Meanwhile, it will enjoy the economy and efficiency of a modern heating and cooling system.”

The storage heaters and old systems have been replaced by a neat line of four outdoor units, each connected to a wall-mounted indoor unit. a 7.1kW system for the reception area, a 3.5kW system in the meeting room, a 2.5kW system in the server room and a 5.0kW system in the upstairs office.  The solution was a Daikin R32 Emura wall mount system in matt Crystal White. The property is finished to a high standard so the Emura’s sleek modern design was well-suited. 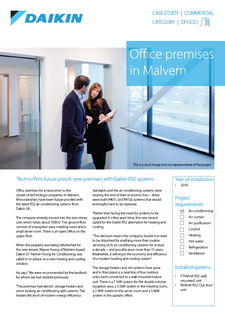