Portcullis House is near the Millennium Stadium and Cardiff city centre.

It consists of three storeys of open plan offices fronting Cowbridge Road East, with seven storeys of smaller offices and meeting rooms in a taller wing behind.

Heating and cooling for the old system was provided by boilers and chillers – all of which were in a poor condition.

The complex includes 12 flats, known as Belgrave Court, which are not included in the air conditioning system.

"Design flexibility of Daikin BS boxes simplified the piping requirements for serving large and small rooms on different floors. We considered an alternative system, but if we’d used it we would have been in danger of exceeding maximum piping lengths.

We would have had to pipe down to a box on the lowest level, then up again to reach the fan coils on the higher floors. With the new design BS boxes included within the Daikin VRV IV solution, we simply branched off on the way down.The Daikin design was perfect for this application.”

There are 38 Roundflow cassettes from1.8kW to 7.2kW in the open plan offices and other large spaces, and 21 wall-mounted FCUs from 1.2kW to 2.9kW for smaller offices and meeting rooms.

The indoor units are served by three roof-mounted VRV IV heat recovery systems, totalling 74hp. Each system serves one of the three open plan areas and a range of other rooms. Connection ratios of 110%-120% maximise capaciy utilisation. 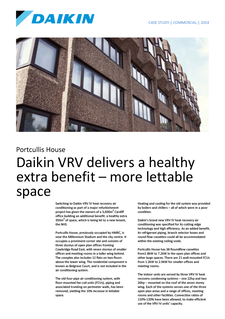